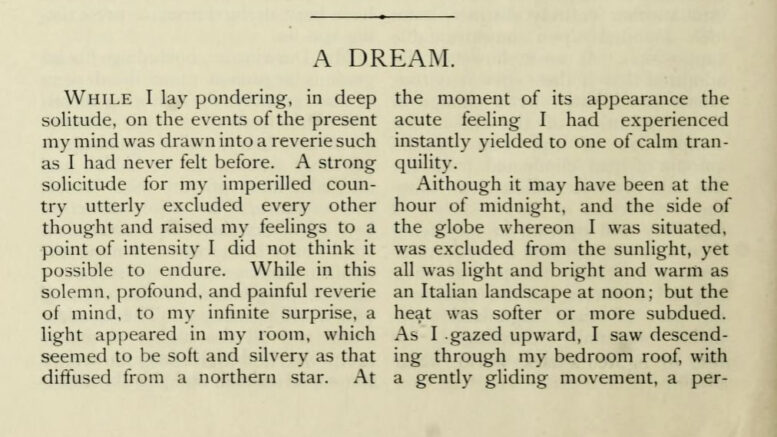 After seeing these things and gazing once more upon the beautiful city, the following passage of Scripture sounded in my ears : “Out of Zion the perfection of beauty God shineth.”

“Wherever it is found and however it is expressed, the Golden Rule encompasses the moral code of the kingdom of God. It forbids interference by one with the rights of another. It is equally binding upon nations, associations, and individuals. …scriptures are studded with stories of contention and combat. They strongly condemn wars of aggression but sustain obligations of citizens to defend their families and their freedoms. …Peace is possible. We can learn to love our fellow human beings throughout the world. …we can live together with mutual admiration and respect…”

“Things seem to us, in our shortsightedness, all confusion, but a clear pattern is marked out that we can discern.”

‘But there is another war that has gone on since before the world was created …That war, so bitter, so intense, has never ceased. It is the war between truth and error, between agency and compulsion, between the followers of Christ and those who have denied Him. His enemies have used every stratagem in that conflict. They’ve indulged in lying and deceit. They’ve employed money and wealth. They’ve tricked the minds of men. They’ve murdered and destroyed and engaged in every kind of evil practice to thwart the work of Christ. …The war goes on. It is waged across the world over the issues of agency and compulsion… truth and error … love and respect, of loyalty and fidelity, of obedience and integrity….’

‘…we do reserve to ourselves the right to tell our people what we think is right regarding politics as affecting the fundamentals of our government system, to warn them of the dangers that lie under the present course, and to try to persuade them that their peace, their happiness, and their security do not lie along the path of the present trends of government.’

“The Book of Mormon speaks of the Gadianton robbers, a vicious, oath-bound, and secret organization bent on evil and destruction. In their day they did all in their power, by whatever means available, to bring down the Church, to woo the people with sophistry, and to take control of the society. We see the same thing in the present situation.”

“Today civilized nations are sitting on a mountain of explosives, accumulated in defiance of Christ’s teachings. Let the heat of hatred, suspicion, and greed become a little more intense, and there will be such an international explosion as will greatly retard, if not forcibly drive from the midst of mankind, the hoped-for peace heralded by the heavenly hosts when Christ as a babe was born in Bethlehem.”

“We of this Church have a particular regard for freedom under the protection of law. With us it is a religious tenet. …Only a free soul is fit to enter His kingdom. Men must learn here to live as free men and to apply the restraints which true freedom imposes to be fit for the heavenly realm. Hence we are unalterably opposed to the attempt of any nation or man or group of men, foreign or domestic, to take away or destroy or abrogate the freedoms guaranteed under the law of our land.”