A statement by President David O. McKay concerning the position of The Church of Jesus Christ of Latter-day Saints on Communism.

In order that there may be no misunderstanding by bishops, stake presidents, and others regarding members of the Church participating in nonchurch meetings to study and become informed on the Constitution of the United States, Communism, etc., I wish to make the following statements that I have been sending out from my office for some time and that have come under question by some stake authorities, bishoprics, and others.

Church members are at perfect liberty to act according to their own consciences in the matter of safeguarding our way of life. They are, of course, encouraged to honor the highest standards of the gospel and to work to preserve their own freedoms. They are free to participate in nonchurch meetings that are held to warn people of the threat of Communism or any other theory or principle that will deprive us of our free agency or individual liberties vouchsafed by the Constitution of the United States.

The Church, out of respect for the rights of all its members to have their political views and loyalties, must maintain the strictest possible neutrality. We have no intention of trying to interfere with the fullest and freest exercise of the political franchise of our members under and within our Constitution, which the Lord declared he established “by the hands of wise men whom [he] raised up unto this very purpose” (D&C 101:80) and which, as to the principles thereof, the Prophet Joseph Smith, dedicating the Kirtland Temple, prayed should be “established forever.” (D&C 109:54.) The Church does not yield any of its devotion to or convictions about safeguarding the American principles and the establishments of government under federal and state constitutions and the civil rights of men safeguarded by these.

The position of this Church on the subject of Communism has never changed. We consider it the greatest satanical threat to peace, prosperity, and the spread of God’s work among men that exists on the face of the earth.

In this connection, we are continually being asked to give our opinion concerning various patriotic groups or individuals who are fighting Communism and speaking up for freedom. Our immediate concern, however, is not with parties, groups, or persons, but with principles. We therefore commend and encourage every person and every group who is sincerely seeking to study Constitutional principles and awaken a sleeping and apathetic people to the alarming conditions that are rapidly advancing about us. We wish all of our citizens throughout the land were participating in some type of organized self-education in order that they could better appreciate what is happening and know what they can do about it.

Supporting the FBI, the police, the congressional committees investigating Communism, and various organizations that are attempting to awaken the people through educational means is a policy we warmly endorse for all our people.

The entire concept and philosophy of Communism is diametrically opposed to everything for which the Church stand’s — belief in Deity, belief in the dignity and eternal nature of man, and the application of the gospel to efforts for peace in the world. Communism is militantly atheistic and is committed to the destruction of faith wherever it may be found.

The Russian Commissar of Education wrote: “We must hate Christians and Christianity. Even the best of them must be considered our worst enemies. Christian love is an obstacle to the development of the revolution. Down with love for one’s neighbor. What we want is hate. Only then shall we conquer the universe.”

On the other hand, the gospel teaches the existence of God as our Eternal and Heavenly Father and declares: “. . . him only shalt thou serve.” Matt. 4:10.)

Communism debases the individual and makes him the enslaved tool of the state, to which he must look for sustenance and religion. Communism destroys man’s God-given free agency.

No member of this Church can be true to his faith, nor can any American be loyal to his trust, while lending aid, encouragement, or sympathy to any of these false philosophies; for if he does, they will prove snares to his feet. 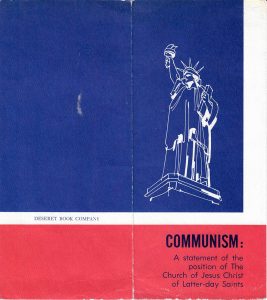 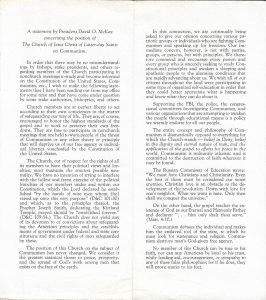